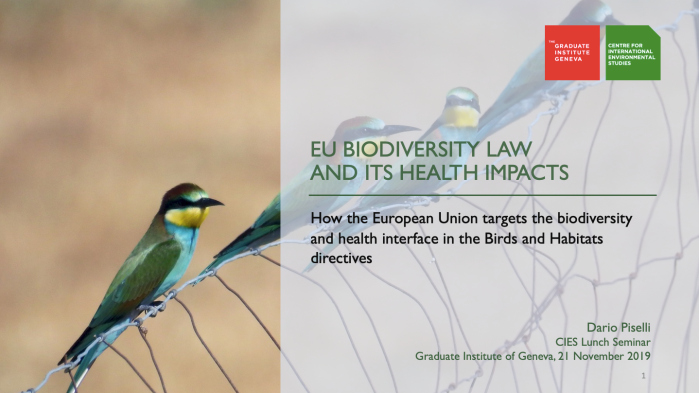 Dario Piselli, programme manager of the Jean Monnet Module on EU Law and Sustainable Development) was invited to discuss the health impacts of EU biodiversity law during a seminar organised by the Centre for International Environmental Studies of the Graduate Institute of International and Development Studies, which took place on November 21st in Geneva. The seminar was part of the Fall 2019 edition of the CIES Lunch Seminar Series, a series of interdisciplinary research seminars on environmental, natural resource and development issues aimed at the dissemination of research results to academic experts and policymakers.

Mr Piselli, who is a PhD candidate and affiliate member of the Centre for International Environmental Studies,  presented the book chapter on ‘EU biodiversity law and its health impacts‘ that he recently co-authored together with EULawSD academic coordinator Riccardo Pavoni. In particular, he focused on the interaction between EU nature conservation legislation and human health and well-being considerations, as articulated in the Birds and Habitats Directives (Dir. 2009/147/EC and Dir.92/43/EEC) and their interpretation by the Court of Justice of the European Union. 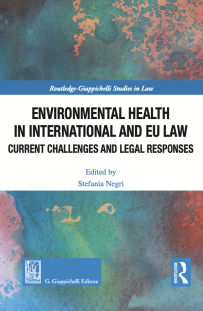 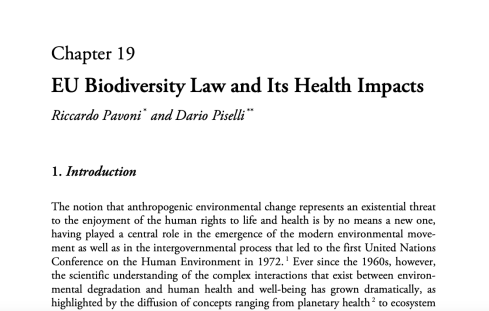 Prof Riccardo Pavoni and Dario Piselli, respectively academic coordinator and programme manager of the Jean Monnet Module in EU Law and Sustainable Development, have recently co-authored a chapter on ‘EU Biodiversity Law and its health impacts‘ for the upcoming volume ‘Environmental Health in International and EU Law‘, edited by Prof Stefania Negri and published by Routledge in the new series of Routledge-Giappichelli Studies in Law.

In recent years, and with growing intensity since the adoption of the Paris Agreement, the concept of environmental health has emerged as a fundamental prism through which to analyse the complex interplay between global health and environmental law. Environmental risks, ranging from soil, water and air pollution to waste management and land use change, are now estimated to contribute to one quarter of the global disease burden, amounting to at least 13 million deaths per year according to assessments conducted by the World Health Organization.

Debates proliferate in multilateral fora ranging from the World Health Assembly to the Conference of the Parties to the UN Framework Convention on Climate Change, covering aspects including the environmental determinants of health, the social-ecological dynamics of infectious disease emergence, and the direct and indirect health benefits arising from the fight against environmental degradation. As a consequence, the need to harness synergies between these two areas of global policy-making also becomes more urgent.

Within this context, the chapter deals with the health impacts of current European legislation in the field of biodiversity, and the possibility for a more effective integration of human health and well-being within its provisions. It addresses the progressive incorporation of  health considerations in the Habitats and Birds directives and in the Invasive Alien Species regulation, the use of health-related arguments in the biodiversity jurisprudence of the Court of Justice of the European Union, and the linkage between environment and health in the application of the precautionary principle.

Overall, the chapter argues that if one excludes some limited attempts by the European Commission to mainstream socio-economic benefits in the management of the Natura 2000 network, the Habitats and Birds Directives’ critical role for health essentially remains a side-effect of their conservation aims. In particular, as the Directives continue to suffer from poor implementation and compliance at the national level, the chapter suggests that a more effective integration of human health and well-being within their provisions could significantly strengthen these instruments’ contribution to the achievement of the EU Biodiversity Strategy.

The volume ‘Environmental Health in International and EU Law: Current Challenges and Legal Responses‘ is now available for pre-order at this link.